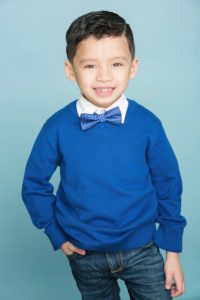 Seven year old Ian Ho, represented by Carolyn’s Kids (A division of Carolyn’s Model and Talent Agency), was cast and has recently completed filming on the Lionsgate thriller ‘A Simple Favor’ with Blake Lively, Henry Golding and Anna Kendrick.

Ian plays the role of Nicky, son of the elegant, mysterious Emily (Blake Lively) and English Professor Sean (Henry Golding). The film, produced by Paul Feig and Jessie Henderson, directed by Paul Feig, is based on the book of the same name written by Darcey Bell. The story is of a mommy blogger in a small town discovers that her best friend has vanished. A Simple Favor is a remarkable tale of psychological suspense—a clever and twisting free-fall of a ride filled with betrayals and reversals, twists and turns, secrets and revelations, love and loyalty, murder and revenge written in the same vein as Gone Girl and Girl on the Train.

Ian is a Canadian born actor from Toronto, Ontario. He began his acting career at the age of four, and has appeared in TVO’s “Now You Know” and a commercial under his belt.  He is excited to appear in his first feature film.  When he is not reciting his lines, Ian loves training in Muay Thai, and Tae Kwon Do, playing basketball, singing, dancing and putting on skits with his twin sister and cousins.  He dreams of one day becoming a doctor and professional athlete, while continuing his acting career.   His favorite musical artists include Drake and Justin Timberlake, and his favorite teams include the Toronto Raptors, and Toronto Blue Jays.  He thanks his parents for their undying love, support, and chauffeuring, and allowing him to swear with impunity for this movie.

We are very excited for young Ian and look forward to seeing the movie when it is released.  Check out the IMDB profile for A Simple Favor to see the details on the full cast.

We will be sure to share more information about the movie release and the trailer as it comes available!

Things Every Actor Should Know

A Candid Interview with Kwasi Akuffo